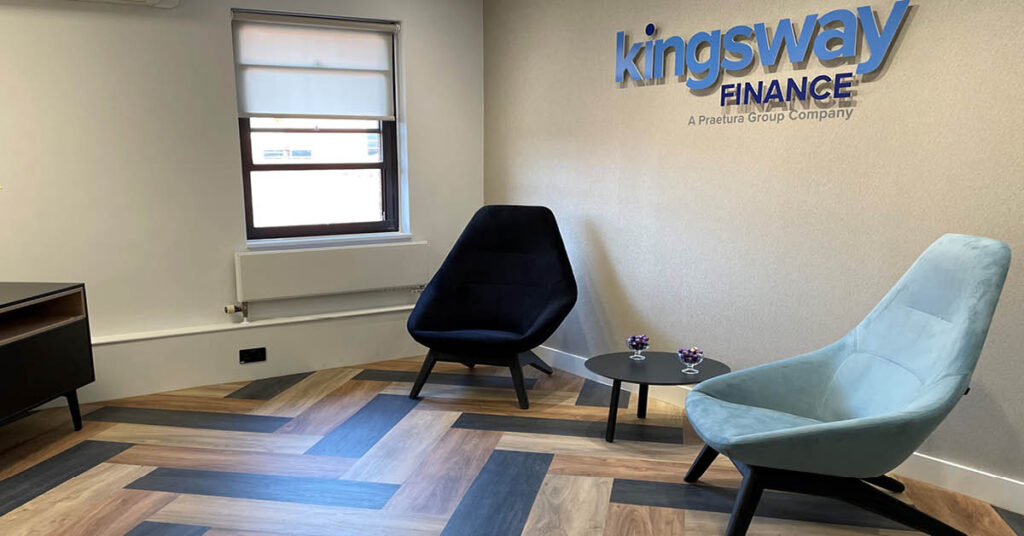 At the end of last year Kingsway’s office closed and staff moved to working from home and in a temporary satellite office, so the remodelling of their offices could begin. In less than three months, the work has been completed and the Kingsway staff are back working together again, in their bright, fresh and completely revamped new office space.

Speaking to Zoe Anthon, who managed the project from inception to completion, Zoe told us about the changes that had been made: “Our offices have been given a full face lift, in line with our new branding that was revealed at the end of last year. The biggest change is that we’ve updated to a more modern open plan aspect, rather than private offices and a small pooled area. This allows for greater interaction between different people and different teams and will help us work together even more efficiently than before (if that’s possible!)”.

Speaking about specific improvements, Zoe added: “We have updated our meeting room by adding hi-tech audio and visual technology to make any meetings held in there more accessible. There is also a new break-out area, so there’s a place for members of the team to relax together and numerous hot-desks have been introduced, so fellow Praeturians from other Praetura Group companies can make use of our fabulous new office space too!”.

Paul Bradbury, Kingsway Finance’s Commercial Director, commented: “We are growing team, both as Kingsway Finance and as a company within the wider Praetura Group which is also expanding rapidly. Now was the ideal time to upgrade the office space to give us the room to grow.

This marks another milestone in a special year for us at Kingsway, as we celebrate our 25th anniversary. This investment by Praetura and specifically the Praetura Asset Finance (PAF) Group provides us with a modern state of the art facility, that will see us through the next 25 years of growth as we continue to support UK SMEs”.

I’m looking forward to the team being back together in one place, enjoying the new space and would also like to take the opportunity to thank Zoe for her immense effort to make this project such an enormous success”.